Drs Tzourio-Mazoyer and Laura Zago, very noted researchers in the field of reasoning, engage with my Psychological Science report on the dissociation between algebra and language, offering some potential cautionary points:

Myself, Dr Osherson and Dr Parsons, reply to their feedback explaining why the cautionary points do not actually apply to our paper, and thus do not affect the conclusion that there is a dissociation between the neural basis of the syntax of language and that of algebra: 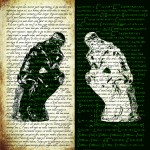